Last year, I spent some time diving into common architecture patterns to learn how they apply to Android apps. Specifically, I focused on Model-View-Controller (MVC), Model-View-Presenter (MVP), and Model-View-ViewModel (MVVM). I quickly became a bit overwhelmed.

Since architecture patterns are independent of software and platform or language and framework, there are many definitions and implementations in use. I read many helpful tutorials but I found it challenging to take a step back and understand the big picture. What are the goals of each pattern? How do they affect what behavior or state can be tested? What are the pros and cons when it comes to their use on Android?

The purpose of this post is to fill in those gaps. I will describe three nearly identical apps, differing only in architecture and testing strategy. The apps are as simple as possible while introducing just enough complexity to capture the architectural differences.

Each app displays a series of greetings in a loop (“Hi!”, “Hello!”, “Welcome!”). The next greeting displays when the user clicks the button.

It’s important to include dynamic UI and basic user interaction to draw out key variations in the architectures.

The main takeways of the MVC pattern on Android are:

I implemented this pattern in the app GreetingMVC. For the project structure, I created two packages, model and controller, to really emphasize which class plays which role.

Here is the model class. This class simply returns a greeting based on the index that is passed in.

Next up is the view/controller class, which is an Activity. You can see the dependency on GreetingModel, as well as the logic to respond to a button click by showing a message fetched from GreetingModel.

Unfortunately, it is not possible to write simple unit tests for GreetingMVC. We are limited to creating more complicated UI tests since the business logic (responding to a click with a new message) is part of an Activity. (The dependency on the Android framework in the diagram is a warning sign that this will be the case!) While we have begun to implement separation of concerns by separating out the exact selection of the message in GreetingModel, we haven’t gone far enough.

I also came across the following variations:

To wrap up MVC, it begins to address separation of concerns by splitting the model from the view, which is better than all logic being in the activity. However, we can’t easily test the controller (activity) logic and we have to manually save state to handle configuration changes. We’ll address the first concern in the next architecture pattern.

The main takeways of the MVP pattern on Android are:

GreetingMVP demonstrates this approach. The project structure contains three packages, model, presenter, and view. Note that the view package contains two classes - GreetingView and GreetingActivity. GreetingView is the interface that facilitates communication between GreetingActivity and GreetingPresenter. Using an interface facilitates testing the presenter, as we’ll see below. 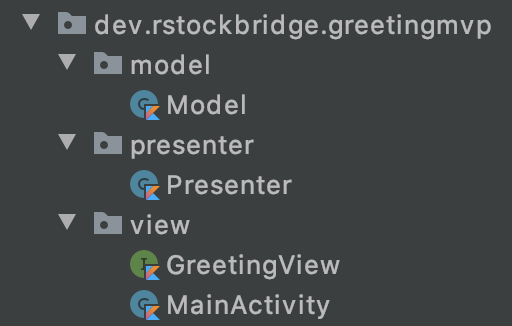 First up is the view interface class GreetingView. It requires that any implementation of the view must provide a function to display the provided message.

And finally the most important piece, the presenter class. It relies on a GreetingView implementation and a GreetingModel. The view calls onButtonClicked() when appropriate, and GreetingPresenter responds by fetching the appropriate message from GreetingModel and telling the view to display it via view.showMessage(). I did not use an interface to hide away the specific implementation of onButtonClicked() in GreetingPresenter - I’ll explain why soon.

Now that the business logic and framework/UI are separated, we can write unit tests. We will test the presenter only rather than both the presenter and the view. This is because the view is just responsible for very simple UI tasks, and I trust that the Android widgets are working correctly.

That’s why I didn’t bother to hide GreetingPresenter’s onButtonClicked() function behind an interface - we do not need to be able to mock GreetingPresenter because we are not going to test GreetingActivity. (Remember in MVP the view holds a reference to the presenter.)

However, to test GreetingPresenter, we definitely need to mock GreetingView, which you can see in this example test. Notice that we are testing how the presenter interacts with the view (asking the view to display a particular message) rather than testing the presenter’s intrinsic state (click count).

To recap, compared to MVC, MVP has an even better separation of concerns, and now we can test the presenter. However, there are some downsides in the context of Android apps:

Spoiler alert…MVVM will address some of these concerns.

The main takeways of the MVVM pattern on Android are:

This diagram illustrates the MVVM pattern. GreetingModel continues to be the same as for MVC and MVP. The separation of responsibilities is very similar to MVP, with the GreetingViewModel replacing GreetingPresenter from MVP. (And so the view, GreetingActivity, holds a reference to the view model.) The key difference is that GreetingViewModel no longer depends on the view, just on the model (and implicitly on an Android framework class, ViewModel, with no lifecycle.) Rather than communicating directly with the view, GreetingViewModel relies on a reactive approach using LiveData to communicate from the model to the view.

GreetingMVVM is the final sample app. The project structure contains three packages, model, presenter, and viewmodel. In contrast to MVP, no interface is required for the view since GreetingViewModel no longer depends on the view. 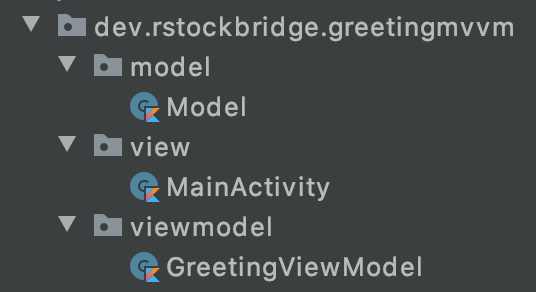 The view class, an Activity, is below. Notice the use of the observer pattern. GreetingActivity listens for any changes in the message value, and displays the new message.

Here is the view model class. While the view calls onButtonClicked() as in MVP, GreetingViewModel relies on LiveData to propagate changes in the message value. Note that the mutable internal state is exposed by immutable LiveData, so that the view can’t accidentally mutate view model state.

And finally, here is a test. In this case, we are checking the current value of the message in GreetingViewModel, i.e., we’re testing view model state.

MVVM has many advantages over MVC and MVP on Android:

I haven’t yet experienced any cons with MVVM, and not surprisingly the Android framework team recommends using MVVM with ViewModel in most situations.

What have your experiences been with different architectures in Android apps? I’d love to hear your thoughts.